…we played music together as children; we enjoy each other’s presence as adults…

The orchestra was founded in 2017 in the honour of the 50th-anniversary concert of the Balmazújváros Youth Wind Orchestra (Bekton).
Two enthusiastic elderly members expressed their desires concerning the reconvening of former orchestra members for at least one joint play of Titanic Marsch.
The idea was followed by detailed organization, with letters and messages being sent to all parts of the world. The reception of the proposal was very different, as many of the former members have not blown into an instrument for decades. Some rejected it, some hesitated, and some immediately said yes. Some just laughed at it all.
After thorough planning the team with the right number of people seemed to have come together, everyone managed to get an instrument so that the rehearsals could start. Members gathered not only from Balmazújváros but also from Debrecen, different parts of the country, the United States and Australia.
The question arose about who should be the conductor; several suggestions were made about the person of the conductor being a young man. The choice fell on Miklós Radócz, who gladly accepted the invitation.
The old members, who grew up under conductor Béla Adamóczki’s wings in the 1970-80s, were touched by the experience of making music together again, the atmosphere of rehearsals and performances and the recollection of old memories to such an extent that they decided to reunite the band under the name of Balmazújváros Veteran Pioneer Orchestra.
Our current uniform and our symbols serve only as nostalgia and reminiscing on our memories. It should be noted that we do not want it to seem like a political manifestation of any kind. 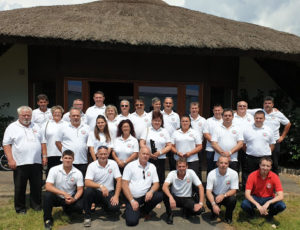